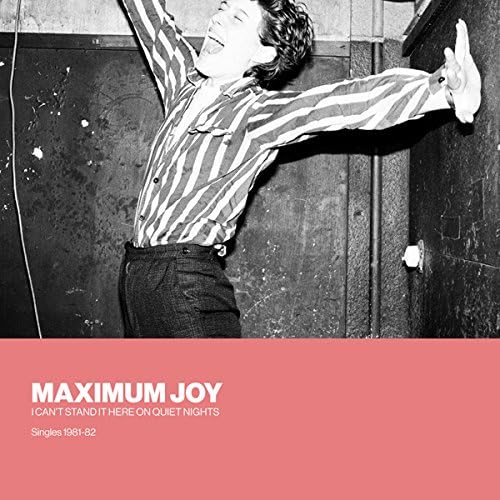 'Maximum Joy is an aspiration, a claim to passion. To call a band 'Maximum Joy' is to ask a huge question - what is the very best you ever felt or hope to feel and more importantly how far can you take it?' Silent Street is a new collaborative label from Chris Farrell (Idle Hands) and Kiran Sande (Blackest Ever Black). For their first release they're proud to present I Can't Stand It Here On Quiet Nights, a compilation of singles by one of our shared musical lodestars; Bristol's extraordinary Maximum Joy. The band was formed in 1980, by 18 year-old photography student and vocalist Janine Rainforth alongside Tony Wrafter, a trumpeter/saxophonist previously affiliated with Glaxo Babies. Wrafter's former accomplices, Charlie Llewellin (drums) and Dan Catsis (bass), completed the original line-up, alongside erstwhile Pop Group guitarist John Waddington. With a youthful confidence and energy that leaps out at you even now, they took their diverse influences - punk, modern jazz, disco, dub, funk, soul, early hip-hop, Afrobeat and chansons - and distilled them into some of the greatest, most intoxicating pop music ever made. Together they carved out a story which today stands as a sumptuous feast for anyone interested in the roots and evolution of "the Bristol sound". Along with prior associations with The Pop Group and Glaxo Babies, there are links, back and forth, with The Slits and Dennis Bovell, Adrian Sherwood and On-U Sound, the Berry Street 'hole in the ground' studios, and so on, through to the Wild Bunch, Massive Attack, Smith amp; Mighty, and Tricky's 'Aftermath'. Thirty-five years on its impossible not to be blown away by their combination of instrumental virtuosity and DIY pluck, and by their fearless application of disorientating dub FX. In terms of open-minded, progressive and life-affirming music made in the post-punk era, little else comes close. I Can't Stand It Here On Quiet Nights - the first ever official UK reissue of Max Joy material - is centred around the trio of singles the band released on Y Records between 1981-1982. Their first, 'Stretch', was licensed to seminal American label 99 Records and soon after became an anthem on the New York club underground, a cult staple at Danceteria and on late-night radio. This comp gives pride of place to their first B-side, 'Silent Street / Silent Dub': a languid, haunting tribute to long summer nights in St Pauls (where the Idle Hands shop presently resides) and specifically the Black amp; White Cafe, "where dub-reggae reigned supreme, 24/7". Llewellin's mesmerising one-drop kit and Catsis's outrageously heavy bassline anchor the track, allowing Rainforth's exquisite vocal and Wrafter's trumpet to soar within the intense, expressionistic dub mix. In both subject matter and execution it is the definitive Bristol tune. 'White And Green Place (Extraterrestrial Mix)', 'In The Air', and wistful instrumental 'Simmer Til Done' also feature; the non-Y bonus is the 12" version of 'Do It Today', Maximum Joy's contribution to the Fontana compilation Touchdown, which originally came out in '82 as a white label split with The Higsons. I Can't Stand It Here On Quiet Nights will be released on 2x12" vinyl, with sleevenotes by Janine Rainforth, Tony Wrafter and Kevin Pearce. Time to acquaint, or reacquaint, yourself with the eclectic, exhilarating work of Bristol's finest, brightest pop idealists. Tracklisting A:Silent Street / Silent Dub B1:White amp; Green Place (Extraterrestrial Mix) B2:In The Air (12" Mix) C1:Building Bridges / Building Dub C2:Simmer Til Done D1:Stretch (7" Mix) D2:Do It Today File under: Post-Punk, Jazz, Dub / RIYL: The Raincoats, The Slits, ESG, Vivien Goldman, Pigbag, Brenda Ray

Our website uses cookies to improve your experience on this site and to provide you with services and content tailored to your interests.
By continuing to use this site you agree to the use of cookies.

We are very pleased to announce that the Hotel Lutetia remains open! Our rooms and Suites become real Parisian appartments with all the comfort you need. Read 'The Set Collection Safe Stay', to learn what we do to take care of the health and safety of our guests and employees.

Hotel Lutetia is open, and reservations can be made.

Book a Suite and enjoy the best benefits during your stay in Paris!

Enjoy 10% discount with flexibles dates and destinations in Europe

The only Palace hotel on the Left Bank

Hotel Lutetia is an iconic landmark situated in the vibrant Saint-Germain-des-Prés area of Paris and the only luxury Palace hotel on the city's Left Bank. Originally opened in 1910, the building's design was a daring move from Art Nouveau to the emerging style of Art Deco. The Lutetia delivers an authentic Parisian experience and has been at the heart of the local community for more than 100 years. The hotel now features an eclectic mix of restaurants, bars and lounges throughout the historical ground floor including the return of the iconic Brasserie Lutetia and the Saint-Germain refined restaurant that delights the senses from breakfast oeufs fermiers to after-dinner gourmandises orchestrated by executive Chef Benjamin Brial. Unique to the area, Akasha Holistic Wellbeing Centre is Lutetia's 700 sqm/7,500 sqft spa dedicated to wellbeing and fitness and featuring a 17m swimming pool bathed in natural daylight.

Learn More About Our History

Choose the Left Bank for your discovery of the City of Lights. On your own, with your lover or your family, pick the offer that will perfectly match your needs. We have imagined for you some delightful adventures to make the most of your stay in the capital city and return home with memorable souvenirs of Paris. Discover now all the accommodation packages Hotel Lutetia has to offer.

Throughout its history, the Lutetia has been a gastronomic address and a place to meet people and talk, where tradition and modernity come together around the shared value of taste. Resident guests and Parisians who had made it their home are now delighted to rediscover this cosmopolitan atmosphere which is the Lutetia’s strength.

Luxurious 700sqm sanctuary in the heart of the Left Bank, the Spa of the Hotel Lutetia is a magnet for guests and leading therapists from around the world. No stay in Paris is complete without a visit to this candle-lit oasis, sampling beauty treatments, fitness training, and healing therapies offered nowhere else. Your new Parisian haven…

Discover the secrets of the Hotel Lutetia and the Left Bank. History, culture, arts, exhibitions and insider spots are all here for you to enjoy the best articles to discover preparing your stay, during your Parisian getaway and to pursue your stay once back home. Just follow the guide…

The Founding Hotels of The Set

Thank you for subscribing to our newsletter